For three years I was the scientific advisor for the TNT television drama, Perception, starring Eric McCormack and Rachael Leigh Cook. 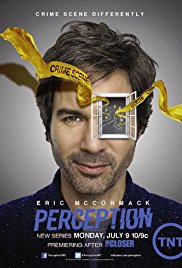 Eric McCormack played Dr. Daniel Pierce, an eccentric neuroscience professor with paranoid schizophrenia. He was recruited by the FBI to help solve complex cases. Pierce had an intimate knowledge of human behavior and a masterful understanding of the way the mind works.

My job was to suggest ideas and brainstorm scenarios with the talented stable of writers, and then to read the scripts in detail for accuracy and feedback. For each episode, I also spent a minute or two speaking to the underlying neuroscientific issues. See “Inside the Mind of Perception with David Eagleman”.

By season 3, I wrote the story for one of the episodes, entitled Eternity.

"Eagleman has a talent for testing the untestable, for taking seemingly sophomoric notions and using them to nail down the slippery stuff of consciousness."
- The New Yorker

"What Eagleman seems to be calling for is a new Enlightenment."
- Sunday Herald

"David Eagleman offers startling lessons.... His method is to ask us to cast off our lazy commonplace assumptions.
- The Guardian

"David Eagleman may be the best combination of scientist and fiction-writer alive."
- Stewart Brand

"David Eagleman is the kind of guy who really does make being a neuroscientist look like fun."
- New York Times